The groom’s friend arrived at the wedding wearing a saree and wearing a bindi on his forehead, the bride’s reaction came like this 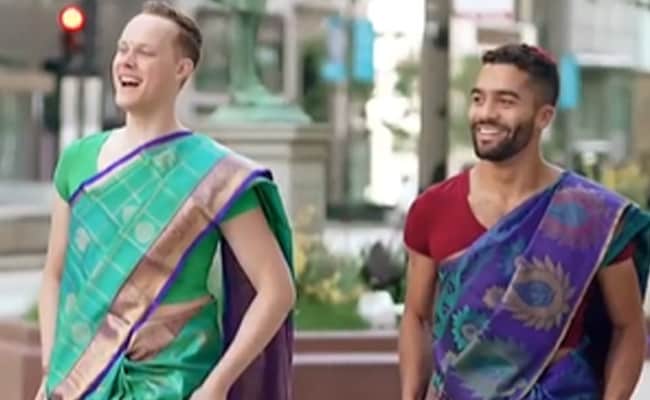 The groom’s friends arrived at the wedding wearing a saree and wearing a bindi on their forehead.

Friends and family members enjoy a lot in Indian weddings. Especially the friends of the groom and the friends of the bride celebrate the wedding. Friends make a lot of preparations for this special occasion. From their look to dance performance, friends prepare for months and do not leave any chance to make their friend’s wedding special. One such video is going viral on social media, in which friends have done something that is winning the hearts of the fans.

It is seen in the video going viral that some friends together have shown a different kind of creativity on a friend’s wedding. In Indian wedding, you must have seen that friends and family members wear traditional dress in marriage. While women wear saris, men wear dhoti kurta or pajama kurta, but these friends of the groom have done wonders. He himself reached the friend’s wedding wearing a saree. This video is becoming increasingly viral on social media and users are quite surprised to see this video. The confidence of these friends after wearing the saree in the video is worth watching.

Please tell that these boys wanted to do something different on their friend’s wedding. That’s why she thought of wearing saree. In the video, a woman is seen wearing a saree to him. Along with the saree, these boys also put bindi on their forehead and reach the wedding. Seeing this look of her, the bride and groom were also surprised for a while. Although later he was seen smiling. Later the groom hugged his friends.

This video has been shared by paraagonfilms on its Instagram account. Millions of people have watched this video since it went viral. People are liking this video a lot.

Shraddha’s father told NDTV on phone – “He fainted after hearing about the murder”.