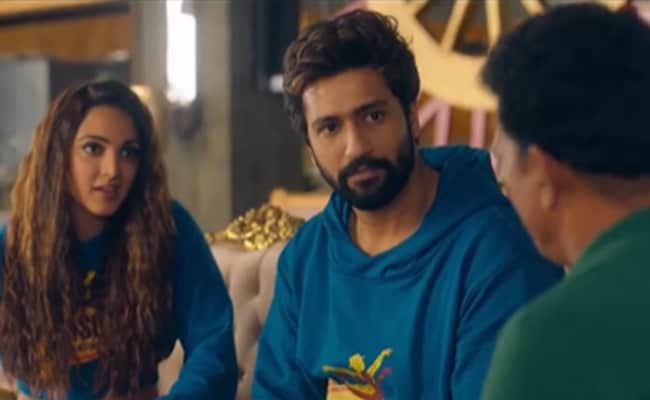 The trailer of Vicky Kaushal, Bhumi Pednekar and Kiara Advani starrer much-awaited film Govinda Naam Mera has come out. Directed by Shashank Khaitan, the trailer begins with Govinda (Vicky Kaushal) lovingly calling Suku (Kiara Advani) but it turns out to be his dream when his wife Gauri (Bhumi Pednekar) kicks him to wake him up. Is. In the next scene, Gauri insults Govinda by calling him “useless” and introduces him to her lover. On meeting her boyfriend, an angry Govinda demands a divorce, but Gauri tells him that it will cost him Rs 2 crore.

After this, we get to see some romantic moments between Govinda and Suku. However, their happiness seems to be short-lived when Govinda and Suku find a dead body at Govinda’s house. Is this Gauri’s body? This thing has not been disclosed in the trailer. What happens next is all in the movie. After watching the trailer, Govinda Naam Mera looks like an entertaining film. Actors have done a great acting. The chemistry between Vicky and Kiara is sizzling and the mystery will keep you hooked.

Vicky Kaushal also shared the trailer on his Instagram handle and wrote, “One story, many twists and turns! Why are there so many problems in my life? One murder, some mystery, lots of thrill and masala guaranteed!” This is the second time Vicky Kaushal is sharing screen space with both Bhumi Pednekar and Kiara Advani. Earlier, Vicky had appeared in Bhoot Part One: The Haunted Ship with Bhumi. He was seen in the Netflix anthology Lust Stories.

Govinda Naam Mera, directed by Shashank Khaitan and produced by Karan Johar’s Dharma Productions, will release on December 16, 2022, on the OTT platform Disney Plus Hotstar.

Delhi Trade Fair 2022: Ladakh is taking part for the first time after 3 years of becoming a Union Territory