You will also be surprised to see this dance performance of Rubina Dilaik, Boss lady rocked the stage 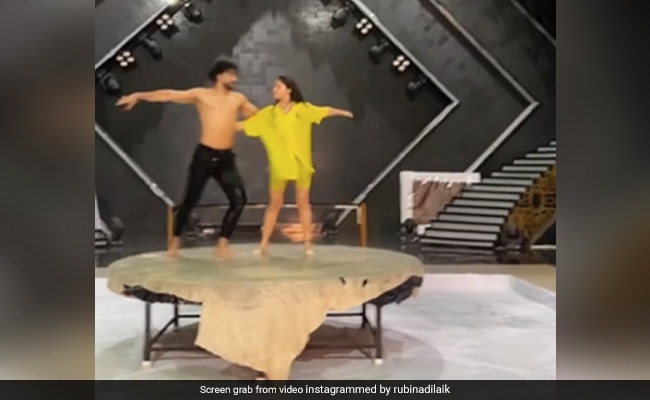 Television’s popular actress Rubina Dilaik wins the hearts of fans with her performance as well as her glamorous style. Rubina is also very active on social media, which is why she has a tremendous fan following. While Rubina flaunts her beauty and fashion sense, these days Rubina’s dancing talent in the dance reality show ‘Jhalak Dikhhla Jaa’ is also making people crazy. In the past, Rubina had suffered a neck injury during dance practice, after which she went on a break but now she has made a strong comeback. Her tremendous dance video is going viral on social media. Sharing this video, Rubina has praised her choreographer fiercely.

In the dance reality show ‘Jhalak Dikhhla Jaa’, more than one dance performance of Rubina Dilaik is increasing the beats of the fans. Once again her tremendous dance video is in the headlines of social media. This is a scintillating dance video of Rubina and her choreographer Sanam Johar, in which the performance of both has set the water on fire. Sharing this video on her official Insta handle, Rubina Dilaik has praised choreographer and artist Sanam Johar. In this video you can see that, Rubina and Sanam are doing an incendiary dance on the song ‘Use Dekha Sanse Ab Aati Mujhe Kam’. Wearing a neon colored loose shirt and shorts in the video, Rubina is seen dancing in the middle of the water with her choreographer Sanam. The chemistry and dance moves of both in the video can make anyone crazy.

Said this in praise of choreographer Sanam Johar.

Sharing this video on Instagram, Rubina Dilaik wrote in praise of Sanam Johar, ‘That choreographer who can harmonize with every feeling can only be versatile. Sanam Johar, I am not only learning but your versatility and talent are also teaching me a lot. The excitement of the fans is clearly visible after seeing this dance performance going viral on social media. A fan wrote on the comment box, ‘Now can’t wait to see your performance’. Apart from this, someone wrote, Uff Rubina, someone else wrote that, the excitement has increased further. 1 fan wrote on the comment box that, ‘Rubina, you deserve to win this show.

These Bhojpuri superstars are not behind Bollywood people in terms of earning, earning in crores