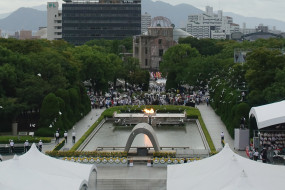 Digital Desk, Tokyo. Japan on Saturday celebrated the 77th anniversary of the atomic bombing of Hiroshima during World War II.

Silence was observed at 8.15 a.m., exactly when the US dropped a uranium bomb on the city on August 6, 1945, killing about 140,000 people and exposing millions to radiation, Xinhua news agency reported.

At a memorial ceremony held at the Peace Memorial Park, Hiroshima Mayor Kazumi Matsui warned in the peace declaration that the world was increasing reliance on nuclear.

“We should immediately destroy all nuclear bombs,” he said. The ceremony was attended by Prime Minister Fumio Kishida, representatives from 99 countries, as well as UN Secretary-General Antonio Guterres, who is the first head of the world body to attend the event in 12 years.

Guterres warned in his speech that a new arms race had begun. The prime minister said Japan would adhere to the principles of not possessing, producing or allowing nuclear weapons in the country, despite global security tensions.

Share
Facebook
Twitter
WhatsApp
Linkedin
Email
Telegram
Previous articleTwitter must obey the law in India
Next articleYoga Tips: To stay away from kidney diseases, do these 3 yogasanas daily