Nigerian soldiers fell outside the landing zone in practice, some were hanging on the tree and some fell in the car 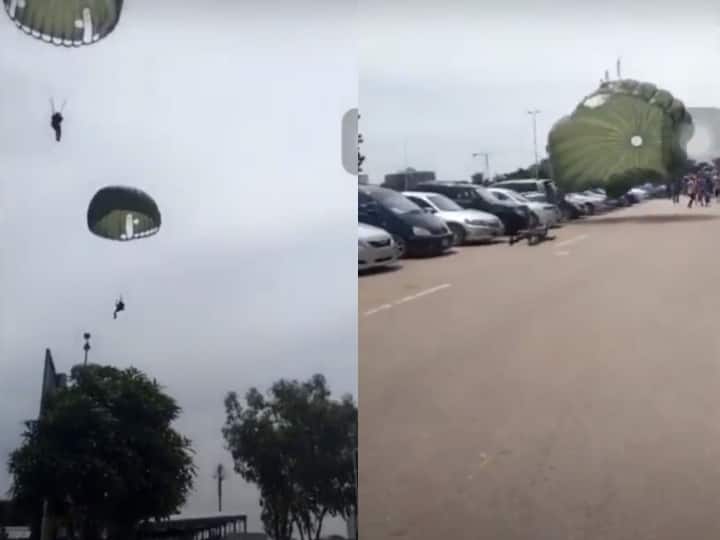 Nigerian Military Paratroopers: Independence Day has been celebrated as the biggest festival of the nation in any country. The African country Nigeria is going to celebrate its Independence Day on Saturday (October 1). For this, preparations are being made on a large scale in the capital Abuja. Nigerian Soldiers will demonstrate their might on this day. For which the soldiers of the army have been preparing for a long time.

During this practice, paratroopers of the army jumped from the sky with parachutes. People were surprised to see this courageous feat of the paratroopers, but during this time something happened that the video of these paratroopers started going viral on social media. In fact, during the parajump, many paratroopers went out of the landing zone and fell across a tree, car or bird board. Some paratroopers have also suffered minor injuries in this.

Make una come ..One landed on a tree, some on cars…. .. Nigeria Army no go kill me with laughter pic.twitter.com/xWzRVdSLik

Many soldiers fell out of the landing zone

This incident of paratroopers falling out of the landing zone was captured by the people present there in their cameras. During this it was also seen that at the time when these soldiers were about to land on the ground from the air, the parachutes of many of them were torn. The people present there did not understand that the soldiers had already jumped with a torn parachute, or their parachute burst in the air during the jump. However, no concrete information has been received so far about what was the reason for the paratroopers falling out of the landing zone.

Whatever be the reason for this incident, but its video is becoming very viral on social media. Users are giving different types of reactions after watching this video of these paratroopers. Many users are praising the soldiers, while some people called it the result of poor training. In the viral video, it can be seen how Nigerian soldiers fell on cars, trees and bill boards in the city.

US Expects Reduced Tempo in Ukraine Fighting to Continue for Months