The war intensified, how to get out of Ukraine? Indian embassy told its citizens 5 options 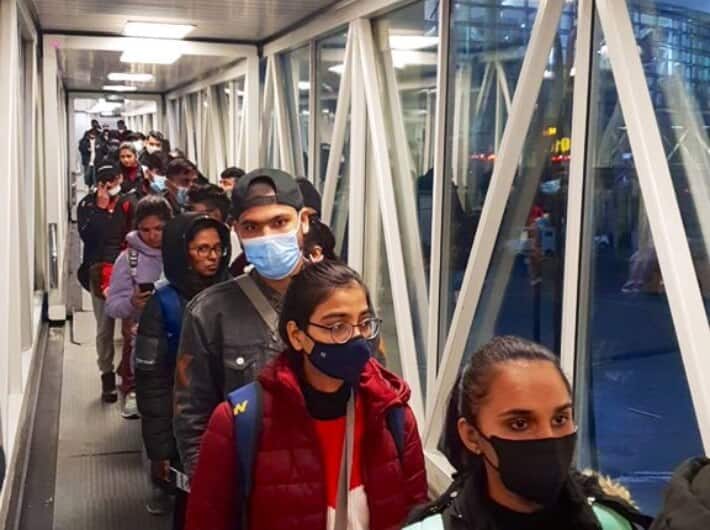 Russia-Ukraine War: Russia has intensified its attacks in Ukraine. Meanwhile, the Indian Embassy in Kyiv has issued an advisory to its citizens asking them to leave Ukraine at the earliest. The embassy shared information on five options to make it safe for Indian nationals to cross the border with Ukraine. As the war has now intensified across Ukraine, the Indian Embassy in Kyiv issued an advisory on Wednesday, warning against traveling to war zones and advising Indian citizens who, Also people are currently in Ukraine, they should leave as soon as possible.

External Affairs Ministry Spokesperson Arindam Bagchi shared the options available for Indian nationals to cross the border based on the information available with the Embassy in Kyiv. This information was in relation to leaving Ukraine by crossing the Ukraine-Hungary, Ukraine-Slovakia border, Ukraine-Moldova, Ukraine-Poland and Ukraine-Romania borders.

The embassy said that Indian nationals crossing the border should take great security precautions while leaving the country. For the Ukraine-Hungary border, the embassy stated that the checkpoints are located in the Zakarpathia region (Tysa, Dzvinkov, Luzhanka, Vyloc, Chop for vehicles only). Traveling to Chop city by train is a convenient option.

Indian citizens must have a valid passport, valid Ukrainian Resident Permit (Posvidka), student card/student certificate (if any) and preferably an air ticket to cross the border.

For the Ukraine-Slovakia border, checkpoints are located in the Zakarpathia region (Uzhhorod-only for vehicles, Mali Berezny, Mali selmenciónly for pedestrians). Indian nationals need to obtain a visa at the border check post unless they already have a valid Schengen/Slovak visa.

In order to obtain a visa and cross the border, it is noted, Indian nationals must have a valid passport, valid Ukrainian Resident Permit (Posvidka), student card/student certificate (if any) and preferably air ticket.

Unless they already have a valid Moldovan visa, Indian nationals are required to obtain a Moldovan transit visa in advance at the Embassy of Moldova in Kyiv.

Ukraine-Romania border posts are located in the Zakarpathia (for Dyakov-only vehicles, Solotvino) and Chernivska (Porbne) regions. Indian nationals need to obtain an advance Romanian visa at the Consulate General of India, unless they already hold a valid Romanian visa.

To cross the Romania border in Chernivtsi or Solotvino, Indian nationals must have a valid passport, valid Ukrainian Resident Permit (Posvidka), student card/student certificate (if any), preferably an air ticket and Romanian visa.

In addition, the contact numbers of Embassy of India, Kyiv or Indian Embassies in the above countries were also shared for any assistance regarding border crossing.

Recently, several explosions were heard in the morning in Kyiv, which were later reported to have targeted attacks against Ukrainian cities and infrastructure using Iranian-made drones. Kyiv Mayor Vitaly Klitschko said at least five people had been killed in Russia’s attacks on the Ukrainian capital.

Klitschko tweeted “From under the rubble of a building in the center of the capital, which was hit yesterday morning by a Russian kamikaze drone, the body of another deceased resident – an elderly woman – was recovered. killed in the attack.”

Zelensky said he would not talk to Putin

Ukraine’s President Volodymyr Zelensky said 30 percent of Ukraine’s power stations had been destroyed by the Russian attack, leaving no room for talks with “Putin’s regime”. He said it was a type of Russian terrorist attack targeting Ukrainian energy and vital infrastructure.

Zelensky wrote in his tweet, since October 10, 30% of Ukraine’s power stations have been destroyed, leading to a massive blackout across the country. There is no room left for talks with Putin’s regime.”

Earlier, the war between Russia and Ukraine has intensified after a truck exploded recently on the Crimea Road Bridge, which set fire to seven fuel tanks of a train bound for the Crimean peninsula.

Read also: Britain PM Race: Rishi Sunak will contest the election for the post of PM, said- I want to improve the economy of Britain

Share
Facebook
Twitter
WhatsApp
Linkedin
Email
Telegram
Previous articleEffective home remedy to keep soft skin and hands and feet in winter, you must try it
Next articleThe whole world is taking advantage of Ayurveda, more than 30 countries have given recognition