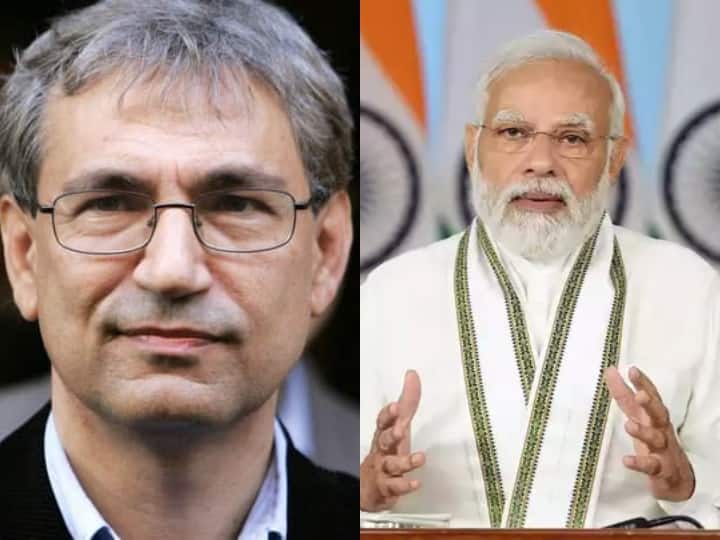 Orhan Pamuk Remarks On Hijab Row: Orhan Pamuk, a famous Turkish novelist and Nobel Prize winner for literature, has given his reaction to the protests against Hijab around the world including India. Orhan Pamuk said that women should be allowed to decide whether they will wear hijab or not.

Orhan Pamuk was questioned during the interview by the English newspaper ‘The Times of India’ about the protests against the hijab in Iran and the prohibition of girl students from wearing the hijab in India. In response, he said, “It will not be decided by Trump, neither Modi nor Erdogan. Women themselves should decide. My position on this is absolutely moderate.”

Actually, Orhan Pamuk raised questions about the hijab in Turkey in one of his novels ‘Snow’. There was a lot of controversy about it. Orhan Pamuk said about the hijab controversy during the interview that France banned the hijab for high-school girls, it’s fine but if you ban it on university going girls like this, then it’s human dignity is against. My novel ‘Snow’ is on this subject. He said that a minority in Turkey was deciding this (since the hijab was banned by secular nationalists), but more than 65 percent of Turkish women wore the hijab as a part of custom and not as an expression of political Islam. .

Pamuk said that Erdoan had come to power against the abuse of these women and forcibly removing the hijab. He said that 70 to 75 percent of the people of the country were angry with this. Referring to her novel ‘Snow’, she said that there is a scene in a theater where a woman is forcibly taking off her hijab and burning it. Iranian women are doing the same way today. He said that he admires these Iranian women and has full sympathy for them. Pamuk said that he did not defend the hijab in ‘Snow’. He defends the right of women to decide what they should wear.

Pamuk also targeted Prime Minister Narendra Modi, including former US President Donald Trump, over the hijab, saying that neither Trump nor Modi nor Erdogan will decide this. Women decide for themselves what to wear. My position on this is quite liberal.

Jammu and Kashmir Target Killing: Farooq Abdullah said – it will not stop until justice is done

Kharge or Tharoor: Whether it is a matter of winning elections or political maneuvers, who is more expert?

Share
Facebook
Twitter
WhatsApp
Linkedin
Email
Telegram
Previous articleBigg Boss 16: Gautam and Soundarya were seen being cozy in blankets, their gossip happening in the middle of the night
Next articleGehlot took a jibe at the pilot, saying that those who get the post without rubbing are fuming, there is no substitute for experience

NASA Mars Mission: NASA made a special plan to stop sex on the way to Mars! It will take a year and a...

India Taliban Vs Pakistan: When Pakistan looked at relations with India, Taliban broke it, gave a big message to Doval